After the relative success of weaving attempt #1 I decided to do a similar project for #2. At the end of my blog post last weekend I said:

I'm thinking of trying the same again, but using an old picture frame to make a wooden loom to give more strength and stability

and this is what I did. There was a picture frame amongst the things I'd brought back from my parents' house and I decided it was about the right size for a "bookmark" loom. The creation of the loom was pretty simple, strip off the backing, and remove the glass. Measure carefully intervals of 0.5mm, find some tacks with pronounced heads, and a hammer. Job done. 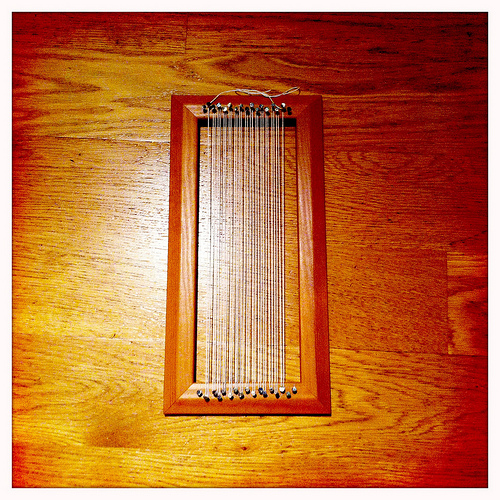 Last Sunday a fantastic selection of undyed yarns turned up, and so my previous plan went out of the window and I decided to use the lovely new things. Amongst the yarns was a thin, solid, almost string like thread which I used as warp threads, and a white, bobbly, soft thread which I used mainly as weft.

Since February I have been using a fountain pen for most of my writing, and in fact carry two fountain pens and a propelling pencil around with me most of the time. Two of these pens are in beautiful, leather, pink pen holders. The other was in a plastic holder. So, a pen holder was what I wanted to make to accompany the others. I thought that if it was all done in white thread it wouldn't look like it belonged, so I colour matched some pink ribbon to incorporate into the project.

This morning I finished the weaving, and so before I attempted to finish it off (a neat hemming process for the finished work still alludes me) I thought I'd take a photo of it on the loom. 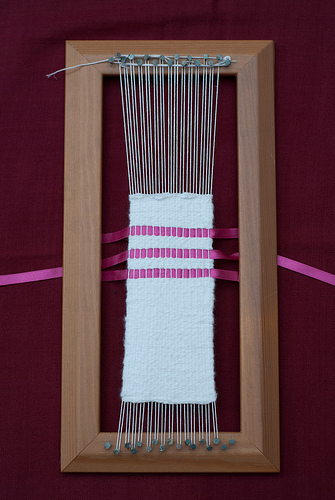 To remove it I used a crochet hook to unhook the looped warp threads from the nails. This gave a bit of extra stability whilst I attempted a hemming process. As I knew I wanted to sew this into a pocket, I decided to go for a simple blanket stitch hemming process to fold the warp threads in and then trim them off. Sewing, and finishing off, isn't a strong point for me at the moment, but I'm sure I'll get better with practice. I also failed to realise that the base of the pen holder should have tapered in, and so it looks a bit "sticky outy". 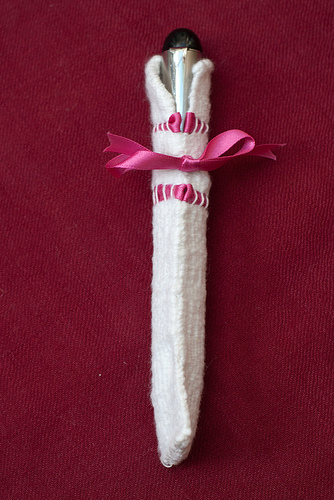 And here it is with the two existing leather pen holders: 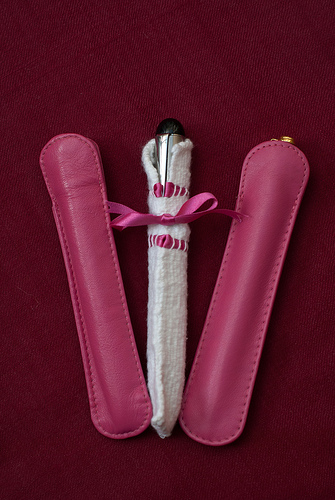 So, overall a success. Much straighter edges that attempt #1, and I loved working with the new yarn. I need to get better at the sewing and finishing off process as I feel that this is where I can ruin or make a project. I've been thinking (and googling) a lot about alternative hemming methods, so I'll try a few more before I settle. I also bought a (very) simple wooden loom from ebay the other day, and, when it arrives, plan on using that to make patchwork squares which will allow me to try out different patterns, techniques, yarns etc

This feels like good progress from attempt #1, and again I've made something useful and usable. I'm very satisfied with how well it matches with the 2 existing pen holders and look forward to finding out how well it performs.