The beginning of February is always a challenging time for me as it brings the deathiversaries of both my parents. So my general watchword is gentle. So a week of gently exploring new things. No risks this week, and allowing myself to sink into the comfort of safe and comforting choices when needed.

A new lunchtime eaterie. I worked a partial day on Tuesday and so was heading into the office at lunchtime and decided to try Alushi, a Lebanese place near the station. I’d seen it mentioned on Trip Advisor but hadn’t found an opportunity to try it out. As I was passing I thought it might be time. There were lots of tasty-sounding options. I went for a Makali wrap - which was potato, cauliflower and aubergine based (I think). It was fantastic. Really tasty. Definitely somewhere worth returning to. It’s a bit of a stretch as an office lunch, but not impossible.

Not content with a new lunchtime eaterie, I also had dinner somewhere new - Tinto Taperia. A friend and I were going to the theatre to see Blood Brothers and wanted a quick, but tasty, dinner beforehand. My friend had been before, I hadn’t. But I would again, especially as a pre-theatre option. Lovely food and good sized portions which allowed us to sample a few dishes. We did seem to order all the garlic in the world so I’m not sure our neighbours at the theatre would have been quite so pleased about our dinner choice!

I’ve walked past ONCA gallery on numerous occasions but had never been in. It’s about a ten-minute walk from the office, and so is another lunch-hour-visitable art gallery. The exhibition I saw was Cthuluscene, which is a series of films. I sat and watched the 7-minute long title film, which I thought was a fascinating view of taxonomy and labelling. The exhibition is on next week as well, so I still have an opportunity to go and see the longer - 30-minute - film when I have more time available.

Thursday evening found me back at The Pottery Painting Cafe ready to paint the pots I’d made a couple of weeks ago. I’ve never done any pottery painting before. I don’t do a lot of painting of any description, and the idea of painting on to a curved surface was quite intimidating. I’d found some photos to use as inspiration, and had deliberately aimed for simple. It was an enjoyable process. I started with my favourite pot, which might have been a mistake as I learned a lot through the process. But I’ve ended up with a fondness for all three of the items I made. The colours will change during the final firing process, so I found it quite tricky to know when I’d painted enough. I guess I’ll find out how consistent I was when I get the pots back. I’m quite excited to see the finished products, and I’ve already started researching options to give pottery another go.

An opportunity came about, via one of the choir ladies, to experience a Bowen Technique treatment. This wasn’t something I’d ever heard of before, but I figured I’d give it a go. It was physically a gentle experience and very relaxing. It left me feeling a little light-headed and quite yawny. Interesting. And something that I’ll be repeating next week as the recommendation is for three treatments as a starting point.

I love watching anything acrobatic whether it’s full-on gymnastics or somewhere on the dance/gymnastics continuum. I’ve realised in recent years that it’s the kind of show that releases my inner child more reliably than any other. On Saturday Richard and I went to the Royal Albert Hall to see Cirque du Soleil’s show Luzia. It was an incredible show. Totally spellbinding. I’ve never seen one of their shows before, but I suspect this won’t be the last time. The scale of the show, the quality and variety of the performers, the moments that made the audience take a sharp intake of breath. All incredible. And really emotional. I loved it. 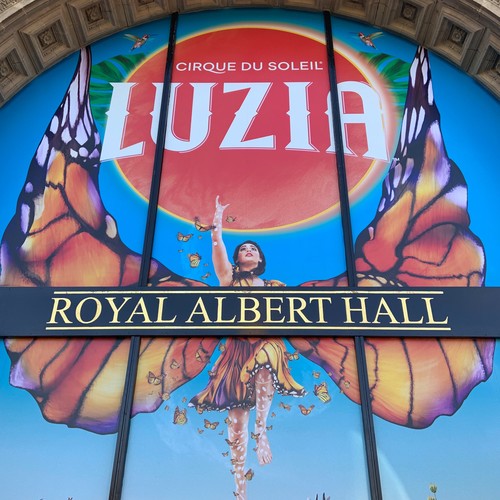