On Friday I attended my 2nd SQLBits conference.  This time it was hosted at the Church House Conference Centre, Westminster which was a good centre, with plenty of facilities and some beautiful rooms.  It also benefitted from being just a 15 minute walk from Victoria.

The day started with a hot breakfast sandwich (bacon, sausage or egg) and tea or coffee, before the first session started at 9.20am.  There were 4 streams of talks, and 3 different audiences - DBAs, Developers, or Business Intelligence users. There was always at least one talk for each audience going on at any one time giving a reasonable amount of choice. Only one talk had to be cancelled due to a speaker not being able to get to London because of the volcano and this was replaced with a panel session.

I chose to start by attending the talk

Getting started with SQL Azure by Dr Keith Burns, Data Architect, Microsoft UK (I can't find a website for Keith that has been recently updated - his blog seems to stop in August 2007 - if you know of one, please leave me a comment)

As I mentioned the other day, I am interested in finding out more about the Microsoft offering for cloud computing, so this was an obvious choice.  As this was the first talk of the day, my notes are a little fragmented as I got my self into note taking mode, but my key takeaways were: 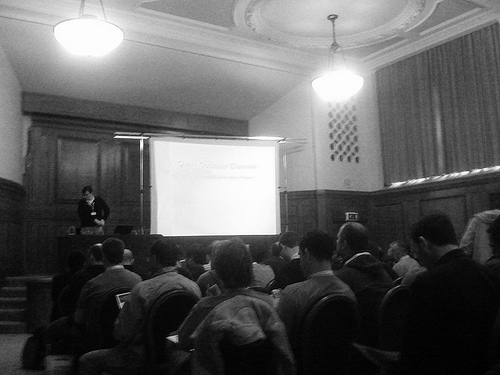 This was a packed out talk, and I ended up sitting on the floor, as did several others. 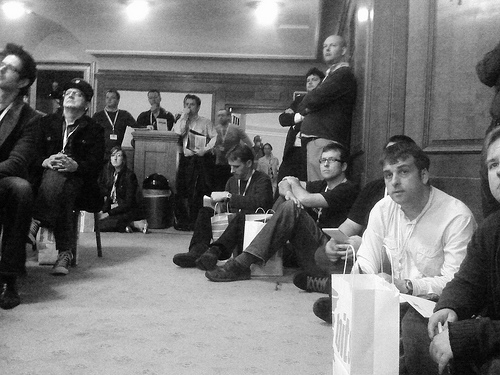 I've never really known much about how the optimizer works, and I knew that this wasn't exactly going to be an introductory session, so I was somewhat concerned about how much of it I'd follow, and whether I'd actually gain anything out of it.  What I learnt was:

Another quick cup of tea before moving on to

Non-Functional Dependencies - A talktorial on getting performance and scalability right through proper Database Design and understanding Set and Relational theory by Tony Rogerson, SQL Server MVP.  The slides for this talk are available here 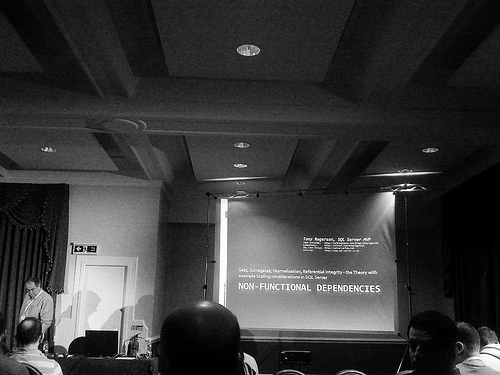 A discussion on some of the things to be considered when using SQL.  Amongst them were:

And then it was lunchtime - a nicely provided brown bag lunch featuring a sandwich, bag of crisp, impossible to peel orange, a muffin and a carton of fruit juice - and time to sit outside in Deans Yard, watching people playing football on the lawn and trying to get my brain to rapidly process everything I'd heard during the morning to allow me to prepare for an afternoon featuring more of the same.  The key sponsors had all been given an opportunity to display their wares during a lunchtime spot, so I stopped by to hear about

I've long been a fan of the SQL Compare tool so it seemed obvious to hear about the new product.  This demo seemed to fit in every one of their SQL related tools which meant I wish I'd made a Redgate Product Bingo card.  The premise of the tool sounds good, integrating into existing source control tools - SVN and TFS at the moment.  They also brought my attention to a free tool SQL Search which I'll be downloading and installing when I'm back in the office as it looks like it'll save me querying the INFORMATION_SCHEMA views quite so often.  Version 1 of the SQL Source Control tool doesn't manage data, which means that when you add a column that you need to be NOT NULL, you can't specify how that column should be populated for existing data - which means you get an error.  It appears that this might be a good solution whilst in early days development, but not so useful for live systems.  Deployment is via the following steps:

Redgate are running an early access program at the moment allowing you to get hold of the tool prior to its actual release.

I had a few minutes here before the next session, although there was no tea to be found before moving on to 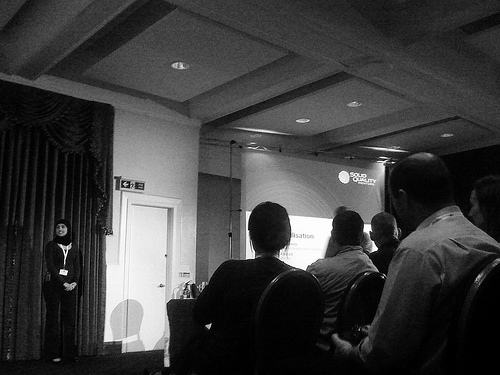 Another packed out session 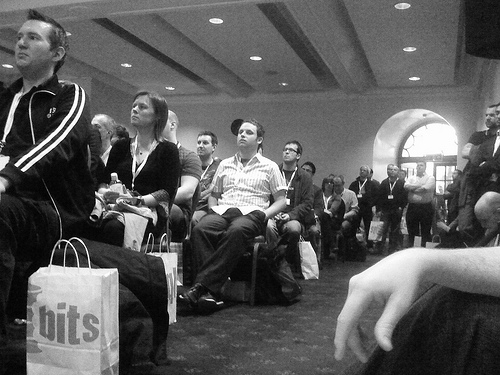 This was quite a theoretical discussion, rather than explaining any tips and tricks on how to achieve your denormalisation.  It also covered a lot of the same normalisation content that Tony had covered before lunch.  Mainly stating that normalisation is good, but sometimes denormalization is good too - for ease of use, or reporting purposes.  Normalisation guarantees good design but only forms part of it and when you normalise you remove a lot of insert, update, delete anomalies but you don't guarantee it which then means using triggers etc to ensure there are no anomalies whatsoever.  Normalisation also comes with some performance overheads which may be removed using denormalisation.

Possible methods for denormalisation are:

Basically, the decision as to whether to normalise or denormalise depends what you're going to do with the data.

Time for tea and donuts before the next session 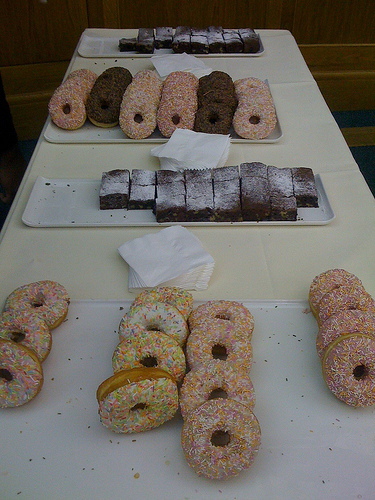 Improving database performance by removing the database by Simon Munro 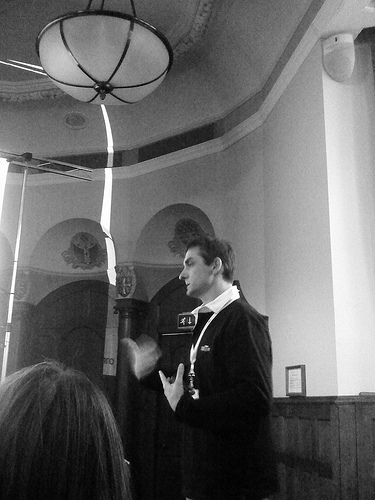 This talk was about the concept of database less systems - it was pretty well attended which surprised me at a SQL conference.  One of the first things Simon said was

This talk is not about NoSQL.  It is about why NoSQL won't die

Which was a bit of a shame as I was quite keen to learn about NoSQL.  However, he did point us in the direction of this video from the last SQLBits conference.

Scalability is often mentioned as the reason why SQL isn't a good solution - but actually, NoSQL isn't going to be any better.  Scalability is about more than just this.  He recommended a book The Art of Scalability which gives guidance about the scalability of everything - hardware, software, processes, architectures etc

Some of the takeaway points for me were:

Simon had some of the best slide decks I saw on the day, I particularly liked this one 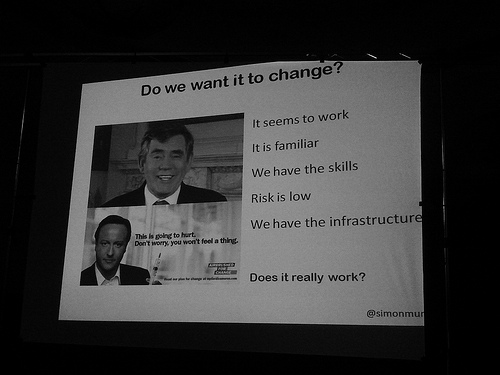 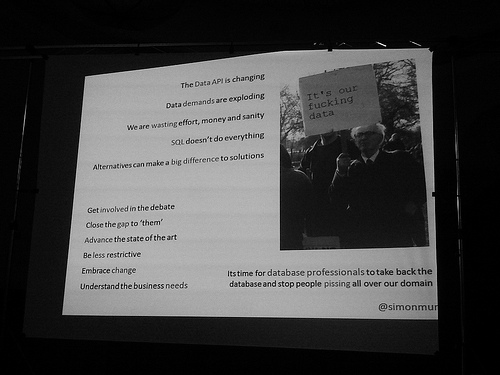 This was probably the most interesting and engaging of the talks I went to, and it challenged me to go away and think more about some of his points. 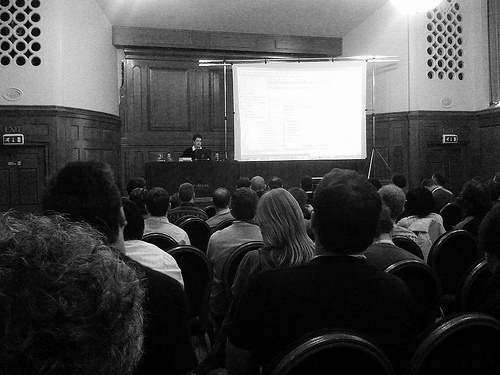 I'd seen Simon present on a couple of previous occasions so I already knew that he'd be a good way to end the day.  And he was.  This followed on nicely from Conor's earlier stuff about scalar valued User Defined Functions not being optimised properly and gave some demonstrations to prove it - basically the query plan showed lots of nested loops, which indicate that each scalar function believes itself to return only one row.  Simon acknowledged the reason that UDFs, when they were first created, were welcomed by the developer community was because of the help they gave to code reuse - something that I'm sure we all strive for.  The best workaround presented was to use query hints - hash /merge - to help query plan generation, where hash join is the safest option when there is no option but to use a scalar function.

But an alternative, at least in SQL 2008, is to use Inline table valued functions, mainly because:

Another alternative is to use the CLR as an alternative approach - the more complex the operation, the more chance that the CLR will perform better than SQL.

And that was the end of SQLBits VI - the evening continued with beer, pizza and games at the conference centre, but I sloped off home with a brain full of information to process and a can of coke for my journey.  Another excellent SQLBits.