I’ve never tried to make Hot Cross Buns before, but as we’re still in lockdown I thought that this might be a good time. I used this recipe and got on pretty well with it. The three separate ‘leave for an hour’ instructions mean it was a bake for a day when I knew I would be around the house for most of the time. Like I say, lockdown is a pretty good opportunity.

I recognised my fear of piping as I was preparing to make the crosses. I think partially it’s a fear because it’s the final stage and it could all go horribly wrong at this stage. Obviously, it’s not going to go horribly wrong, but that’s how it feels. So I took a deep breath and cracked on. The crosses aren’t the evenest things in the world, but they are obviously crosses, and I’ll take that. Nothing to be scared of really.

The glaze at the end made a huge difference to how these looked. So definitely not a stage to be skipped.

They’re a little bit darker than I’d have liked, but they taste good. I’d sampled some from Flour Pot and some from Real Patisserie earlier in the week and they stack up pretty well against them. As an aside, I found the ones from Real Patisserie a bit too heavily flavoured for my tastes. These were lighter and seemed to be a well-balanced flavour.

I’ll probably make some more hot cross buns before the season is over - I’ve found a different recipe which I may try which infuses the spices in the milk and I like that idea. 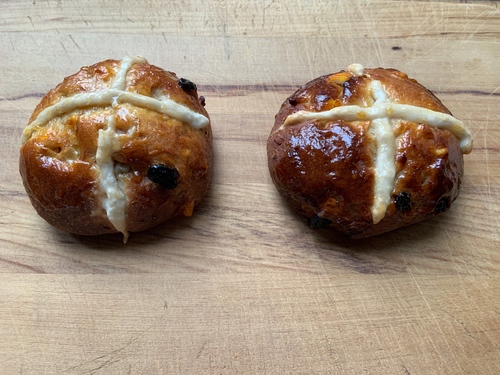 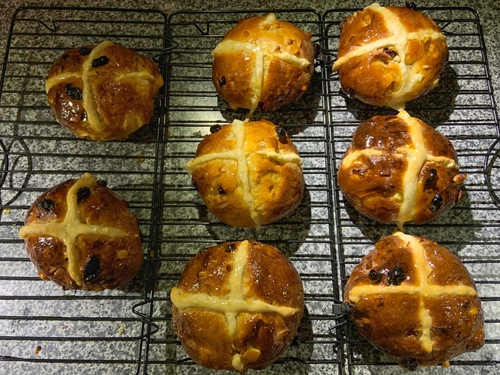