Weaving project #3 was an evolution of project #2 featuring the picture frame loom, and a similar set up. The aim this time was to make a bookmark, and for it to be ready before Christmas as a gift. This meant I had to get my edges as straight as I could and that the pressure was on.

For this project I used embroidery silks as my warp, and another fluffy yarn for the weft (again taken from my selection of undyed yarns). The embroidery silks worked ok, but did have a tendency to split meaning it was all too easy to thread the weft through the warp rather than over/under it. They did provide good colour options for the two tassled ends though.

As with my other projects, the weft was very tight, meaning that none of the warp thread is visible (probably due to me being a bit too heavy handed with my kitchen fork (being used as a beater)). This is something I'm going to work on remedying in project #4 but that actually worked as I wanted for this project. I did have a major unweaving at one point as I changed how was I beating the weft at one point, trying my fingers instead of a fork, but this ended up flattening the lovely fluffy bits of the yarn, so I removed that thread and threw it away and replaced it using my usual fork technique. Another issue I faced was trying to work out what the optimum size for a bookmark was. I gathered up all of the different bookmarks I had and none of them were consistent in height or width. I picked one that seemed to be a good size for most books, and based the sizing on that. The other thing I worked out doing this project, was that I could use a chain stitch line at the top and bottom of my loom to space out the weft threads - this worked really well and created a bit more of an even distribution.

I finished this project using the hemming technique as described/shown in this video which worked pretty well and seems to be pretty robust. I still haven't found a hemming technique that would work when tassles aren't required though.

So, here it is on the loom with weaving completed, ready to be removed and finished. 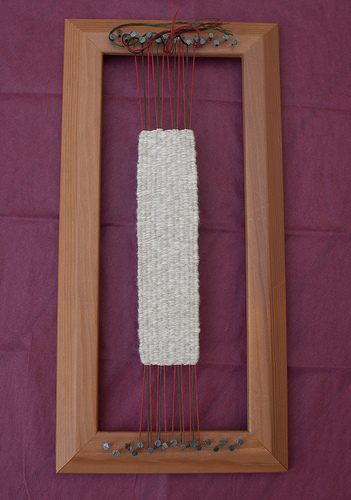 And here it is off the loom and finished. I had quite a job trying to get the tassle bits to be consistent in length and I don't think I ever did manage it properly as they had a tendency to spring off in all directions and not lie straight. I find the finishing process the most difficult still. 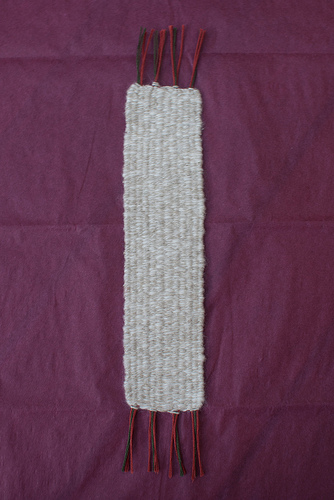 Overall, I'm pretty happy with it, the edges are pretty straight, it looks pretty good and I think it should function as a bookmark without too many problems.

(Post written on 12th December, with publishing delayed until Boxing Day as I know that the recipient sometimes reads this blog and I'd like it to be a surprise)