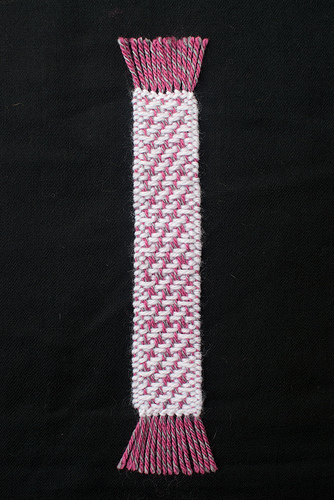 Weaving project #10 was another bookmark, and another bookmark gift.  This one for a friend who is currently studying to be a teacher, and who has recently been writing an essay on Maths and on patterns. It seemed appropriate, somehow, to make her a woven, pattern based, bookmark.  I started off considering this, and this, as they seemed very primary school maths, but in the end I decided on this slightly more sophisticated pattern.

My friend is vegan, which complicated things somewhat, as the most successful of my previous projects have involved wool, which is, obviously, animal based. Fortunately, as part of my yarn identification programme (or, lets buy lots of cheap yarn from Kemps and see what I like and what I don't) I had a selection of acrylic or cotton based yarns. The cotton based ones I discarded as I'd found them too splitty when I did weaving projects #5 and #6, which left me with a handful of acrylic options. I ended up using a Stylecraft Special DK (in Raspberry Marl) warp, and a Jarol Supersoft DK (in white) weft thread - both much thicker than I'd usually use which has left it a bit heftier than normal. However, also being thicker, it took a fairly short time to make up - in the order of 2 hours - which was handy as this was a bit of a last minute gift idea.

Overall, quite happy with the end result. I think DK is a bit too heavy for a bookmark normally, but might well get experimented with a bit more on something a bit bigger as it certainly holds the pattern together well. This was also the first time I really had a very pale weft over a dark warp - and I quite like the effect of the colour from the warp peaking through. Again, I think another experiement of light weft might be in the pipeline (fortunately my yarn pile has some options for me to work through!).

Weaving Project #11 isn't going to be a bookmark for a change! Watch this space.