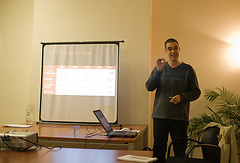 This evening Madgex hosted the first of what I hope will be many VBUG events. After a really informative session in August on LINQ I had high hopes for this evening, and wasn't dissapointed. Daniel Moth gave a rapid, but informative, tour of Visual Studio 2008 and some of the new features of .Net framework 3.5

As with the last event the format was a talk for about an hour, then a break for pizza and beer before heading back for another half an hour or so. 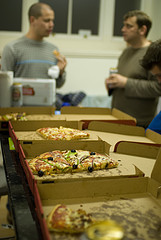 Looking at my notes, again there is a jumble of keywords to go and find out more about. The multi targeting element of Visual Studio 2008 looks great with the ability to swap which framework you're working against simply by selecting from a list. In fact, it seems like the only downside to upgrading to VS2008 is that it will have to be an all or nothing approach for any project with more than one developer - the .sln file has a different format and is the only bit which won't be compatible with VS2005. The inclusion of the Expression Web seems sensible - I remember being impressed by that when I saw a demo earlier this year at WebDD - and I'm particularly keen to see the CSS and javascript intellisense. I'm also hoping the manage styles window will help me get to grips with the precedences of element vs IDs vs classes in CSS as well!Some of the new language features seem like they're included to be time savers (like var and anonymus typing), which at the moment at least I can't see being of help to the developer coming along later to maintain the code. I can also imagine the lambda expressions taking a while to get used to. All in all, another excellent evening, and again a pleasure to see our office space being used for another community event.
comments powered by Disqus