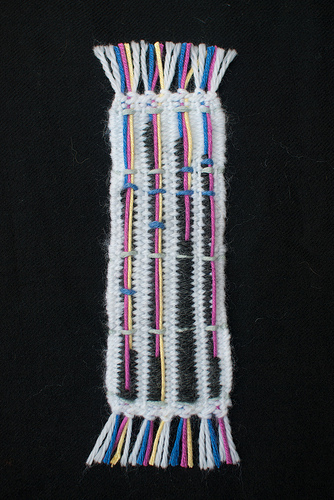 Whilst I was sitting one morning doing work on weaving project #13 I was thinking about the process of weaving and that, effectively, I'm building layer after layer of yarn. I started thinking what else was a stacking structure, and realised that it may be possible to do something with a bar chart and illustrate data via a woven fabric, and this seemed like a great idea. I remembered that in April it will be 100 years since the Titanic sank, and that on my pile of books to read is a book about the Titanic (a collection of stories from survivors). I started pondering what I could do, and continued to do so for the rest of the day, finding a helpful chart of statistics and sketching ideas in the pub we went to for Sunday lunch with very patient friends who encouraged, assisted and who got engrossed in the data too (and provided the idea of having percentile markings on there as well - thanks - that was a genius idea!).

As an aside: My interest in the Titanic, starts many years ago. Between Sixth Form College and University I was receptionist/office manager for a small Maritime and Architectural model making firm in Hull. There wasn't a lot of need for a full time person, as it was a new company with little passing trade, so I often found myself with time on my hands, and being in the time before the internet I worked my way through the bookshelf. Of the various books I read that summer, the Titanic ones were the one that captured my interest and left me with an interest in the subject. 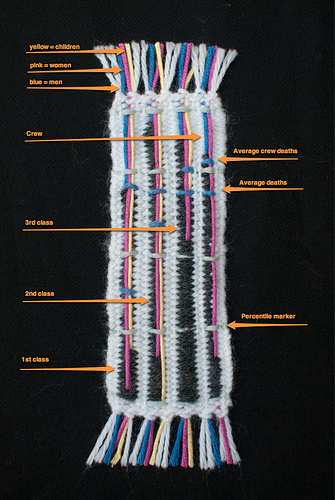 Bottom to top (the weft) - starts with a pale grey/blue thread to represent the 0th percentile - this also appears at 25%, 50%, 75% and 100%.
Black is used to indicate death - note quite how few pieces of blue warp (representing men) can be seen on the finished item.
Blue is used to indicate the average rates - there are lines across each of the classes individually - representing the average death rate per class/crew, and one that goes across all classes at 68% which is the average death rate for the ship.

The best survival rate was second class children, where they all survived. The worst was second class men, where only 8%, or 14 people, survived. Only one first class child died, Helen Lorraine Allison, but that was enough to have a rate of 17%. (Encyclopedia Titanic has a whole range of facts about the Titanic - including survivor and victim stories)

From a weaving perspective, this has been a challenge as I had 4 different weft threads on the go at the same time. I created a google spreadsheet showing row by row what it should be, printed it out and checked them off one by one, but even then I've stopped and checked some of the data as I couldn't believe how bleak some of the chances were. It's a lot thicker than a normal bookmark, which has the benefit that hiding the ends of the threads is much easier. The warp threads were Jarol Supersoft DK and Sidar Snuggly Baby Bamboo DK, and here I discovered that a good warp thread doesn't necessarily have the same characterstics as a good weft - the Jarol Supersoft DK is quite a fluffy yarn which means that the needle point got stuck in said fluffy bits quite often.

This project has taken a lot of concentration and has been more frustrating than most - with common problems being getting the various weft's tangled, catching the white warp thread with my needle, getting a black weft in the wrong place, and having warp threads get pulled together quite tightly due to the unbalance of the structure - still it's a remarkable stable piece of work, and serves it's purpose well.

Here it is, with the book that it was made to accompany: 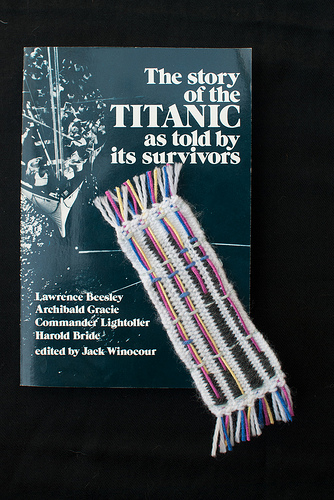 Overall, I'm pleased with both the idea and the execution of the idea. I'm currently only on page 27 of the book, but already I've made use of my bookmark to remind myself about the various survival chances, so it's doing what it was intended for. I am also really taken with the idea of having a bookmark made specifically for a book, or for a subject; a bookmark that isn't just used for marking my place, but is also a reminder of something related. I thought this was very much a project for an audience of one, but the people I've mentioned it to as I've been working on it seem to like this as a concept. So, who knows, I may do more of this in my future. But next, next is going to be something bigger having gained a Dutch plank loom during the week from a friend's Mum.