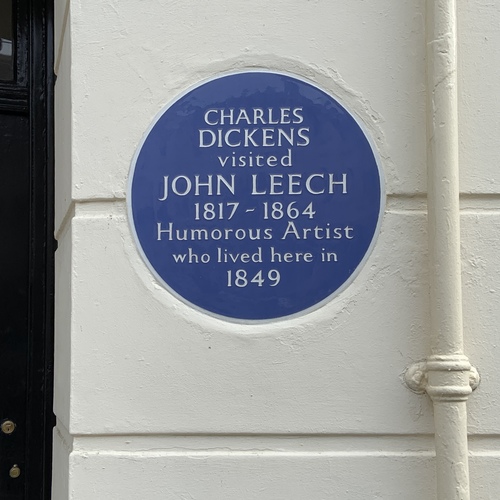 Whenever I walk past it, the plaque always makes me smile. It feels somewhat vague. And asks more questions than it answers.

How long did he stay? Was it for a cuppa or a month? Or somewhere in-between?

The artist lived here only for a year. And during that year Charles Dickens visited. Did he see the artist at other addresses in other cities as well? Were they long term friends? Was the visit significant to either of them, or to the house, or even to the city? What part of Charles Dickens’s career was this? Did Dickens spend other time in Brighton?

Time for a bit of research I feel. I realise I know very little about Charles Dickens beyond his work. And I don’t know anything about John Leech. So…

Based on Wikipedia, Charles Dickens would have been about 37 at this time. He was writing David Copperfield. He was married to Catherine Hogarth. He was the father of eight children by now - one of whom was born in the January of this year.

Meanwhile, John Leech was an illustrator. According to this page, he produced over 50,000 hand drawings, and was the illustrator for A Christmas Carol.

I also found this page which includes

It seems Dickens was a frequent visitor, coming first in October 1837, around the same time that Queen Victoria was making her first appearance in the town. Unlike Victoria, Dickens obviously liked what he saw and came back repeatedly over the next 30 years, staying in a variety of places on the seafront. The Bedford Hotel seems to have been a particular favourite, but he also ‘put up’ at the Old Ship Hotel and, from time to time, stayed in private lodgings with friends and family.

and goes on to say

On one occasion, he and his entourage, which included the illustrator John Leech, were forced to flee their rented accommodation because the landlord and his daughter apparently went quite mad. Dickens described the scene vividly in a letter to a friend: ‘If you could have heard the cursing and the crying of the two, could have seen the physician and nurse quoited out into the passage by a madman at the hazard of their lives; could have seen Leech and me flying to the doctor’s rescue…you would have said it was quite worthy of me…’

The plaque still seems vague. But I feel I understand a little more about the people mentioned on it at least.