My longest run in both time and distance. 55 minutes, 7.75km. Once I’ve achieved my aim of being able to run for 60 minutes I’m going to switch to a distance-based plan as planning routes for time is proving to be a challenge. Today I ended up running along the seafront a little further than I’d planned.

My route today was up Dyke Road, and then down underneath the railway bridge before running along the Greenway for a way. Then to the level for a circuit, through Victoria Gardens and then Pavilion Gardens. Having made it to the seafront I headed off to run around Steve Ovett’s statue before heading back towards the bandstand. When the timer went for 55 minutes I was going to continue for a minute or so more but I got distracted by this bench which was pretty and deserved my attention. 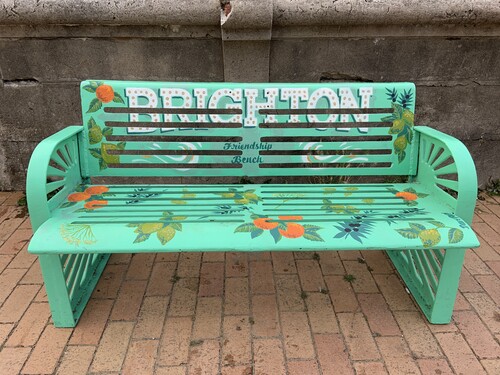 A familiar route - St Ann’s Well Garden, Palmeria Square, Adelaide Crescent and seafront home. I thought about doing some lampost play at the end but my legs were heavy and I was tired after having upped my pace for this run. I did some hill workouts on Tuesday, and my longest run in terms of both time and distance on Thursday so I decided that I didn’t need to push it any further today.

My first GoodGym in the rain. We met and ran to the task location - an older person’s residence and arrived just as some heavy rain appeared. The person we were meeting there to brief us said he hadn’t thought we’d be turning up. But there we were. Tonight’s task was clearing some of the overgrown shrubbery from the front of the residence which we made great progress on until we ran out of black bin bags! They kindly let us use their social room for our exercise session - a lot of abs and glutes work. Which meant the run home included jelly legs!

My new to me (thanks eBay!) running jacket served the purpose well and kept me pretty dry.

It was a wet afternoon and my thoughts of going out for a 60-minute long run to mark the end of my working week and the start of a 2-week holiday disappeared. There was a gap in the rain before the sun set so off I went for a 30-minute run. At the end of my 30 minutes, I wasn’t far off 5k so I kept on running until I heard the voice from the Nike Run Club app tell me I’d hit the distance. At that point, I looked at my phone to read the message that Richard had sent me midway through my run and learned that the Queen had died. After having been at a friend’s funeral yesterday, news of another death, albeit one that had no personal connection, but had a national significance felt a bit much.

After two weeks on holiday with no running, I figured I’d have a free run day and so could do what I felt like running without following any plan - and that included no run at all if I didn’t fancy it. When I woke up I read a bit of the memoir I’m currently reading and saw a lot of “and I went for a run” style comments. So it was obvious I was going to have to go! I decided that a short run was in order and opted for 3k. In the event, I did 2 miles by the time I’d finished and ran a little closer to home. It turned out to be a reasonably timed effort.

Back up that hill into Kemp Town as we returned to an older person’s home - my third visit - to do some weeding and tidy up the front of their property. As always they appreciated us being there.

The post-task workout today was the participants’ choice - we were also asked to make an exercise and the group did them. Burpees! Really? Why would someone volunteer to do them? And then perform them with such enthusiasm? Good to witness his energy levels. Mine are nowhere near that!

A lunchtime run as I’m at the blood doning service this evening. I picked the 25-minute struggle run as I’m finding it harder to get out as it’s got a bit cooler and I’ve had a couple of weeks away from running. So it seemed apt. I opted for a frequently ridden run: St Ann’s Well Garden, Palmeria Square, Adelaide Crescent and the seafront home. I got on ok but can’t say I loved today’s run. I still did it though and so I’ll take that sense of achievement with me through the rest of the day.