About a year ago now, I tweeted

Looking for a mind mapping application for the iPhone or iPod Touch - any recommendations?

A friend of mine mentioned iBlueSky and after a look at the website I bought it. At the time I was planning a couple of Madgex ILP talks, and wanted to try out mind-mapping as a way of organising my thoughts.

One year one and I'm making a lot of use of iBlueSky again as part of my NVQ work. So, the time has come to finally review the app for others who may be looking for an iPhone/iPod Touch mind-mapping app.

I use iBlueSky mainly for idea capture, I like that I can jot down ideas when I get a spare few minutes. It doesn't seem to take long for me to lose myself in the problem domain and add new thoughts. As I mentioned above, I've been making a lot of use of it for my NVQ work, and just the research for Unit D1 has resulted in 3 or 4 mind maps.

The first page you're going to be presented with is a list of projects. Clicking on any one of these will open the project for editing. The order can be changed via the Settings application - allowing you to order them manually, by created date or by last modified date (which is what I've chosen to use) 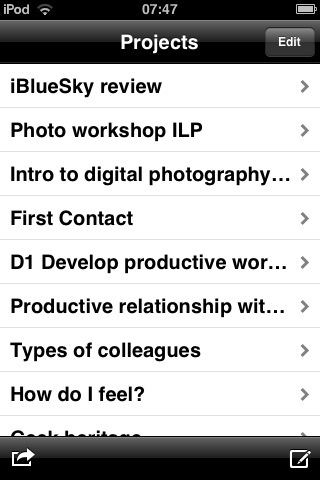 Getting maps in and out

One of the more recent additions to iBlueSky is the ability to import mind-maps. As mentioned on their website, as of version 2.0, released in June

Exports are handled via email, and are provided in PNG, PDF, MM (which works with FreeMind), text, OPML, NMIND and their own BSKY format. You don't chose a format, when you do email the project, all formats get created and appended to the email. 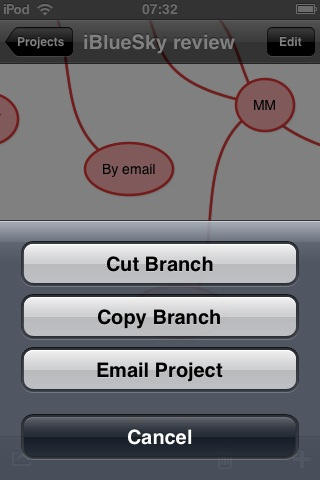 There is also an option to backup all of the projects - this uses Box.Net, a website for sharing files, which comes with a limited free version. All projects are stored in a folder called iBlueSky in the files area. These projects are stored as BSKY format, which are importable via the import function.

How does it work?

I've found the app to be really conducive to getting ideas into a usable format. I start off with a node with the name of the idea/project/task, and start from there. Each branch created off that main node will have a different colour. The colours can be changed if so required. 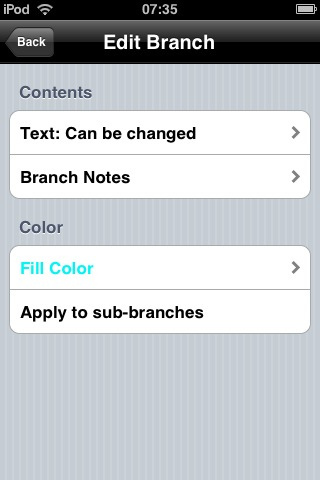 Branches can be cut or copied and so can be moved around if ideas are found to be more or less related.

The orientation of the map changes according to the way that the device is held. There doesn't seem to be a way to lock the orientation, a feature which would be very useful. You can zoom in to the map, so you can see the whole map or a part of it as you feel you need. 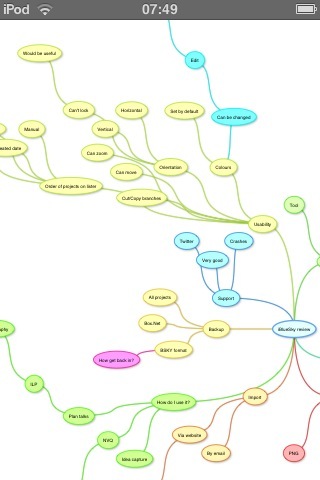 When I bought it a year ago, I paid £4.99. It is now £1 more at £5.99. It is one of the most expensive apps I've bought, and I do go through stages when I don't use it. But, when I do need to do some mind mapping, I find it great. I tend to use it in conjunction with FreeMind now that these can be imported and so will update sometimes on the iPod Touch, and sometimes at a computer.

I recently had the app crash a couple of times, once when emailing, and once when just generally editing. I mentioned this on twitter, and within an hour had been responded to, given the support email address and was in conversation with Tenero as they tried to resolve my issues - most impressive.

Would I buy it again?

Yes, I sure would. The app has evolved (in a good way) over the past year, and has got some great features. It works well for me and suits what I'm trying to do.

The mind map for this review 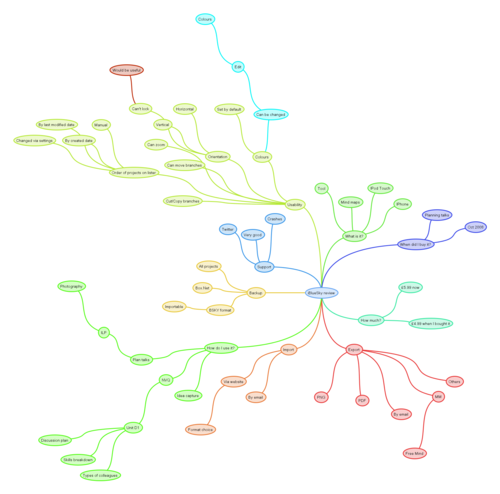 is available in all of the different formats from my downloads area. So, here are the links to it in PNG, PDF, MM, TXT, OPML, NMIND or BSKY format. Feel free to compare the outputs and see if any of them suit your way of working.
comments powered by Disqus