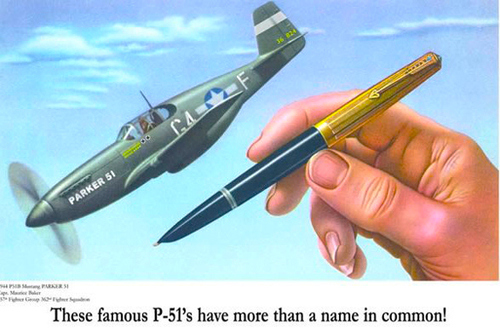 Parker 51 was marketed as a pen that was "ten years ahead." It was the iPhone of the fountain pen world. Lucite--a new material from fighter plane cockpits--was used in its production allowing for a quicker drying but corrosive "Quink" ink to be used. But the most distinctive and useful feature, the hooded nib and overall aerodynamic styling, made this one of the most popular pens ever. By hiding away the biggest and flashiest feature of a fountain pen, the ornate gold nib, the 51s gained a benefit of almost never drying out because of lesser exposure of ink to air--and kicked off the jet age design.

I have owned my Grandfather's Parker 51 pen since I was about 18. It went to University with me, and at one point I took it to a pen shop and had it valued. The value they gave me was too high for me to continue using it every day for my scribblings in class (as I was scared of losing it) so I put it away in a box where it stayed until last year. After Dad died I re-evaluated this decision, and realised quite how ridiculous it was, and so got the pen back out. I've used it as my main writing instrument ever since and I love it.

I do still worry about losing it, but I'd rather have used it and enjoyed using it, than have it sitting in a box never seeing the light of day. This is a risk I'm prepared to take.