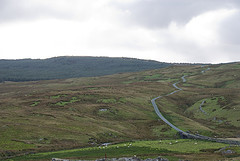 Whilst we were on our recent holiday, we took the opportunity to try out the built-in Route 66 navigation software.

The main observations are as follows:

In summary, I'll probably still print out google maps, and I'll still have a road atlas in the car, but I'll also let Route 66 guide me in and out of cities and towns.

Cross posted to Jane and Richard's yak and natter.