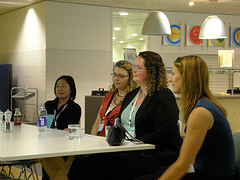 I've considered heading up to London for a girl geek dinner for quite a long time now, months before Rosie, Joh, Devi and Ribot brought the concept to Brighton. The trouble was always that working in Crowborough it was going to be a struggle to get into town in time. Of course I don't work in Crowborough any more, Hurrah!

After my last successful trip to Google, having a Girl Geek Dinner there was just too good an opportunity to miss, so Rosie and I headed off again.The format was different to the Brighton ones, but as this was my first I have no idea whether this is "normal" or not. We arrived and were greated with glasses of wine (provided by Sara of San Lorenzo) and before very long dinner was served in the Google canteen. The desserts were excellent again!After satisfying our hunger, we then had the talks and presentations. First up was Shivauna Raff talking about the future of search and what the next big innovation in search was likely to be (vertical apparently).Next up were Li-Wei Lee and Danielle Drew from the Google Checkout mobile team. Of course, as with all good presentations, their demo failed. They spoke about the development and test process, and most importantly the lessons learnt. They mentioned some specific testing tools for mobile applications which I duly made notes about for Richard. Specifically mentioned were argogroup and mobilecomplete - which sounds like a great, if expensive, way to test a mobile app. Also mentioned was a firefox plugin but I have no idea which one - Helpful eh! It caused quite a reaction when Danielle (from QA) mentioned that they used donuts and beer to encourage others to help test the applications, and also when Li-Wei said that the average google development team is 2.2, and as they had 4 developers they were a fairly large team.Overall a good evening, and I met some interesting people. I'm not sure I'd trek all over London to get to another one, but if it's within an easy walk of one of the mainline train stations served from Brighton then I might well pop along again.
comments powered by Disqus