In my last post about my crocheted hat I commented

I have a couple of options, either I do something to try and stretch it, or I find someone with a smaller head and gift them it.

After a bit of thinking, and a lot of looking at the hat, I realised that the base was just too robust for stretching. So I started to make a second hat. I took my yarns, hooks, pattern and the original hat to Richard's parent's house and made progress. In doing so I discovered that our 6 year old great-neice had a smaller head which the hat fitted. She seemed to like it, and it looks cute on her. So she gained a hat. Doesn't she look sweet? 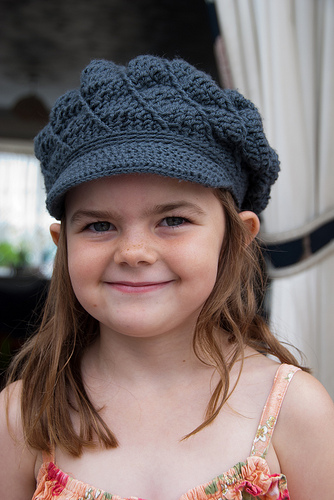 I used exactly the same yarn as last time, same colour and everything so I knew what to expect. The deviations to the pattern this time were:

Part way through I thought it was going to be absolutely massive, but it turned out pretty good actually. This time it fits at least, and although it's a little bit bulky towards the back, it is nice to wear and is warm.

I finished the hat on the Sunday or Monday, took it to show to the friend who found the pattern in the first place on the Tuesday, and then took it on holiday to Munich on Wednesday.

Here's me wearing the hat, taken in our apartment on an iPhone through a mirror. 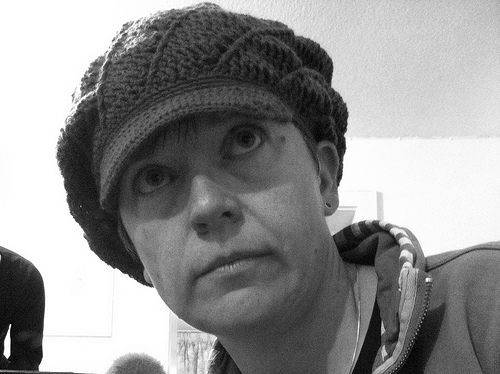 I ended up having to do my "finished product" photos in Munich, hence the use of a hop statuette that I found to be a convenient head shaped/sized ornament in our apartment. Much easier than the plant pot I tried to use last time :-) 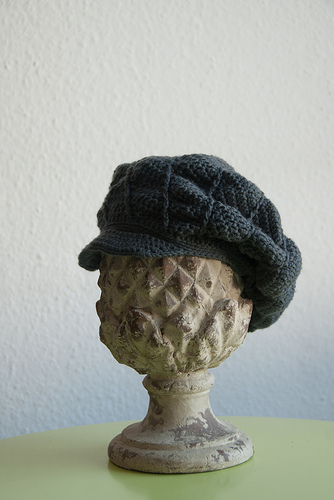 I do plan to make another one at some point putting together the things I've learnt from attempts 1 and 2, but the next one won't be grey. I've ordered a beautiful looking woven scarf from etsy so who knows, maybe the next hat will be coloured to go with that.

In the meantime, as the rain comes down and the days get cooler, this hat is getting used regularly.