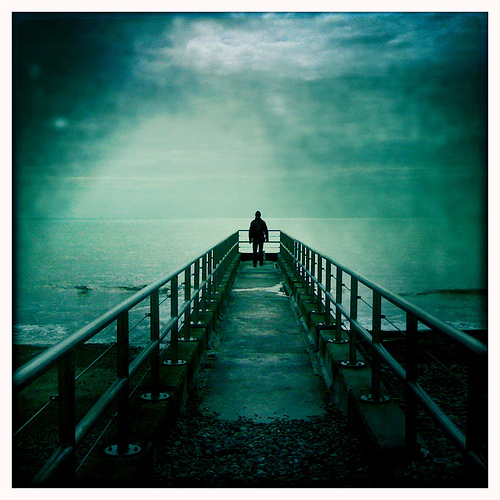 In March I uploaded 236 photos

This photo was taken using hipstamatic with the John S lens and Blanko film (which is fast becoming my favourite combination).

It was taken at Saltdean, just along the coast from Brighton, whilst we were out taking the dog for a walk. Richard and Skitters just happened to walk to the end of the walkway and stop just as I got the iPhone out. I took a similar photo, only posed with them both looking at me, on my Olympus AM-100 film camera loaded with Kodak Professional BW400CN but as the film isn't finished yet, I haven't got anything to show for it yet.

I still have a backlog of photos (614 according to Lightroom) to process from my d80, mainly from our 3 week holiday in Hong Kong, Sydney and Tokyo. I hope to finish these off during April.