Although it can't beat the Golden Gate bridge in San Francisco for setting, it far outstrips it for sheer elegance and as a piece of engineering 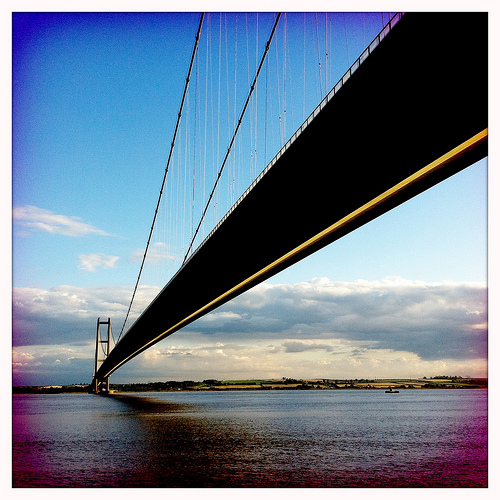 Richard sent me a link to this article this morning. He knows how I feel about "my bridge". It was a constant in one form or another through my life in Hull with my parents. Building commenced just months after my birth and I remember visits with my parents to the site as it progressed. I remember seeing it in a partially completed state, when some of the road sections were in place, and others were stored next to the site. I remember those road sections as being vast. And I remember my Dad explaining to me some of the engineering behind it.

I was one of the many children who lined the streets when the Queen opened the Bridge (I was with my Brownie pack in Brownie uniform waving flags as she went past in a big black car - I was sporting an eye patch at the time due to an unfortunate run in with a pogo stick). I remember seeing queues of cars wanting to go over it when it first opened, we walked over instead. I remember walking across it on many other occasions with Mum and Dad and, in more recent years, Richard as well. I remember preparing a sentence about it in French for my GCSE French oral exam - "Le pont d'Humber est le plus grand pont de la monde" - not technically true but a) I didn't know what the french for "single span suspension bridge" was and b) I liked the rhythm of that phrase.

One of the trainlines into Hull passes under the bridge. So does the main road in. Passing under the bridge has always been a sign that I'm home. It marked the boundary for me between home and away. It still does, but it's a little more subdued and sorrowful these days. Mum's home is within sight of it, which I like. It watches over her.

The Humber Bridge was the first piece of architecture I had an emotional connection with. It's still the one I have the biggest and most deep rooted connection with. As the extract I posted above says, it might not have the setting of the Golden Gate bridge, but it is still "my bridge" and always elicits an emotional response.