Earlier today I found myself in a PC World for the first time in at least a year. I found it quite an interesting experience, seeing what was being sold as consumer grade hardware/software. Amongst the things I spotted, that I hadn't really noticed before was the Echo smartpen. 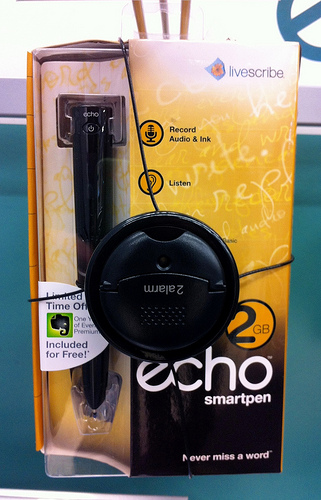 This is a pen that records what you write and what you/others say and synchronises the two inputs together with it later being able to be transferred via USB to a computer for later reviewing via searchable pencasts. It also comes with the ability to download apps - like wikipedia, a translator and even a text based adventure game. The bit that struck me as sheer genius, at least in an on-going revenue way, is that there are specialist items of stationery that accompany it. Pictured below are some of the items that PC World stocked - A4 and A5 notebooks, and post-its (there were also ink refils and cases too). These differ only in that they have pre-printed "buttons" on the pages, showing things like record, stop, pause, navigation etc and that they can be used to create diagrams/grids/"buttons" that interact with the apps that are running - for instance drawing a grid to play tic tac toe on. 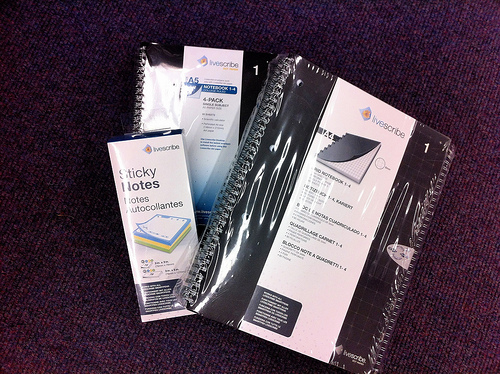 I can't help wondering if there was a way some of this functionality could be built into something like the wacom bamboo stylus - adding another dimension to iPad/other tablet device usage. Also, wondering how something like this works in conjunction with news reports about the demise of the teaching of handwriting in US States.

I have to admit that I'm intrigued by this. I don't want one, as I love writing with my Grandad's Parker 51 fountain pen and I'm unlikely to be tempted away from that experience any time soon. But I'm intrigued, and as the title of the blog post indicates, I can't work out whether this is an insane idea, or an ingenious one.