Lots of people will blog about this conference, lots of people will have blogged it in long form, I didn't. I just made some observations, and as I'm away on my holidays tomorrow, I figured I'd do a very rapid brain dump now...

Marty Neumeier kicked off with the involvement of design in innovation. Beautiful, simple slides.

David McCandless was up next speaking about "Information is beautiful". All about visualisation, which I love. Loved the phrase "It's not a chart, or an article - it's a chartical..." about an image with too much text on it. He did a TED talk recently, which apparently was much like today's talk, so go and watch it.

Samantha Warren was the last session before lunch and spoke about Typography, something I know precious little about, and that my tiny developer mind can't quite engage with. I did remark to Alex that I thought the Papryus lower case h looks like a giraffe, so Alex drew me a giraffe in her notebook. Aww, Alex, you have such talent! As there were a lot of analogies with shoes, Alex put shoes on the giraffe for me. If you ever get an opportunity to sit near Alex at a conference, do it, her notes are elaborate and wonderful.

John Gruber had the difficult post lunch spot, all about auteur theory and the examples between films, tv series and web sites/applications. Interesting stuff, but lost a bit by the fact that he talked to his notes and not his audience a fair bit.

Hannah Donovan spoke about improvisation, after entertaining us with some improvised music (cello, mandarin and piano). She told us how to improvise and why it was important and helpful. She told us that Beethoven and Mozart were improvisers originally - they met once, at a party, and improvised on the piano all night - apparently - but that's not quite how wikipedia has it.

James Bridle was the highlight for me I think. He spoke about the history of the internet, not how it started, but how data evolved. He talked about GeoCities, and how much of that information is lost, the internet archive wayback machine has some of it, but not all. The whole of the internet archive fits into a shipping container. It's a special Sun data center one but it's still a shipping container. He taught me about wiki racing and introduced me to Wiki Hunt which I think is a genius idea. And finally, he told us about the history of edits on wikipedia. He chose the Iraq War page and collected every edit and revision ever made. And then printed it. It ended up being 12 volumes of fairly large books. Leafing through it, which Alex and I did during the break, shows trolling edits, and informative edits. Amazing and beautiful. Amazing to think that there are 12 volumes of history for one article, and yet as a child I remember having a set of encyclopaedia which were probably of a similar size, which were covering every subject in the world. 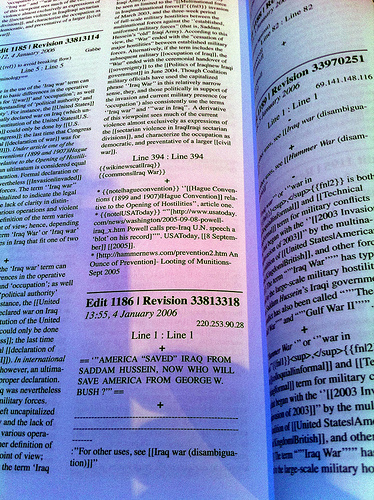 Alex holds one of the volumes (again with a trolling edit): 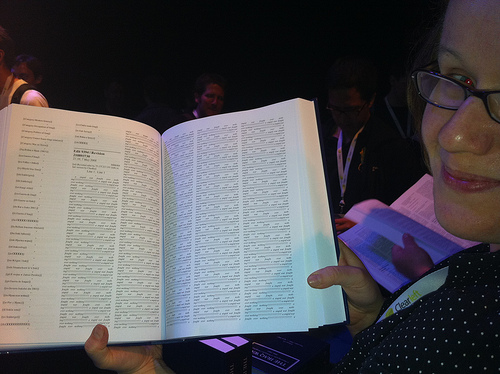 Tom Coates talked about networks and social graphs, about data sharing across applications and how that makes everything richer. He talked about Spimes, another wikipedia article being stuffed on to InstaPaper for me to read. He talked about Objects as a service, and mentioned his internet enabled set of scales, which can differentiate between people and then use wifi to send the data to the website. It can even tweet on your behalf. So just @howfatistom? 186.6lbs at the last reading.  Always a pleasure to hear Tom talk, last time was his best man's speech for Nat and Simon's wedding.

Merlin Mann finished the day with almost a stand up gig, rather than a talk. No slides, no notes, just talking. Talking about being a nerd, and a geek, and making a lovely analogy between developers/designers and border collies - you've got to give them both work to keep them happy. Also introduced me to the concept of Segway Polo

So, another great dConstruct, only my 2nd which seems odd to me, but I guess none of this is core to my specialism, but it was a wonderful reminder of how amazing the internet is, and how inspiring listening to passionate people can be. I also learnt about the existence of micro pigs (thanks Denise!)