Last week, Chris Alcock included a mention of an article .NET Database Migration Tool Roundup in The Morning Brew #109. Both Bruce and I read this and came to the same conclusion, that Tarantino might be worth a look to stop us from continuing writing our own tool to manage the change process reliably. Today we invested some more of our ILP time into examining how it works, and what it does.

Firstly, there isn't much documentation, so we had to fumble around a bit to work out how to use it. I read the wiki page with interest, and found myself agreeing with what was said there. I especially liked the quote:

We found that this documentation, and the process description validated our aims and thoughts on how the process should work, suggesting:

We aren't, initially, looking at a tool that needs to integrate with an automated build environment, so we didn't need a lot of the features that Tarantino offers. Instead we concentrated on the Tarantino.DatabaseManager.exe application and worked with that. The result of this is that some of our requirements aren't met by the DatabaseManager but may be met by some of the other aspects of Tarantino. 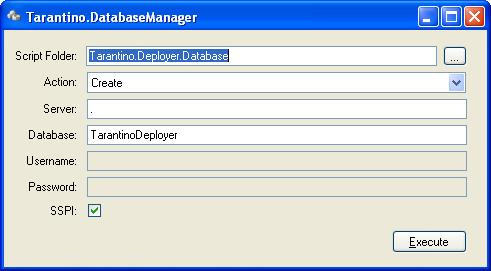 The user interface is fairly self explanatory, and there is a .config file associated with it to pre-fill the default values. There are 4 possible actions: Create, Update, Drop and Rebuild.

DatabaseManager uses file naming as a convention for determining the order in which the update files will run - the recommendation for naming is 0001_Script.sql, 0002_Script.sql etc however during our investigation we discovered that we could leave Copy of 0001_Script.sql hanging around and this would just get appended to the list in alphabetical order. We were somewhat concerned that during the development process amongst a team, more than one person could be working on database updates at a time (and when using a local database, there is no guarantee that anyone else would know about it) which could mean, at best, two files with the same prefix, i.e. 0003_AddTableArticles.sql and 0003_FixBug12122.sql and at worse a source control conflict of 0003_Script.sql. This is where naming conventions would obviously come into play. During our discussions we liked the idea of some form of dependency mapping - i.e. 0003_AddTableArticles.sql is dependent on the change 0001_Script.sql. This would obviously help us to ensure that errors with code vs database versioning could be avoided. This isn't provided within Tarantino.

DatabaseManager records the scripts run in a table named usd_AppliedDatabaseScript in the database that is being worked on. This means that all actions will not be recorded in perpetuity as choosing the action Drop or Rebuild from the user interface would remove this table as well as all others, and the database itself. One of our preferences is to have a central database per server which records the scripts run - this would mean that the dba team would be able to see, at a minimum, what scripts have been run and when. We also feel that having some form of contact details associated with the script is a useful addition - this seems to be covered in the deployment tool that is included in Tarantino, but not on a script by script basis.One of the process pre-requisites mentioned for Tarantino is:

"Create a change script that wraps all of the database changes into a single transactional change script. A Tool like Red Gate SQL Compare makes this a 30 second operation."

This unfortunately means that error handling is poor and transaction handling is non existant. One of our tests was to create a file containing invalid SQL amongst the (valid and not applied) change scripts. The error was reported in the output window amongst nAnt exception reporting - making it quite hard to track down. When the error occurred, then data relating to the preceding SQL files in that Update batch will remain in the database but the subsequent files will not even be called - this leaves the database in a state of uncertainty. The table usd_AppliedDatabaseScript gets a row added for any previous files successfully completed, but the Version gets left as NULL. When I corrected the SQL and re-ran the process, the Version column gets updated to match the version number for the rest of the files successfully applied in the batch. This results in different date/time stamps on the rows, but the Version number being the same which makes me wonder if tracking the version history of the database is then subject to a certain amount of interpretation. In addition, selecting the action Create from the user interface when the database already exists results in an exception being raised - in my opinion this should be handled via some defensive SQL coding.

Note: All tests were carried out on a Windows XP laptop running a local installation of SQL Server 2005.We have previously, also looked at DBVerse to meet our requirements. As neither tool satisfies what we're attempting to do, we'll continue writing our own but this was a worthwhile diversion as it really validates our thoughts on process vs program, and how that process should look.
comments powered by Disqus