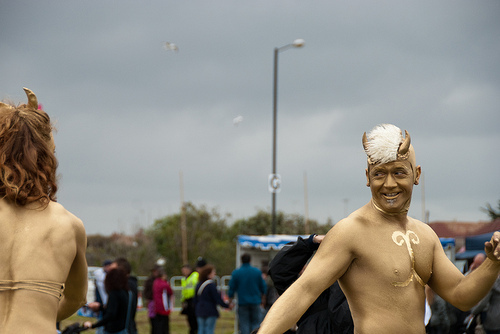 I have now posted a complete year's worth of Favourite upload photos, so for this month I thought I'd post a "could have been favourite" upload of the month

This is a photograph I like, but it is also one that I can see plenty of "it would have been better if"s with. So, I like the interaction between the two golden figures, I like the expression on the guys face but I feel it would have better without the photographer (I think) in the background (the guy with the blue jacket and arms raised as if wielding a camera just behind the guys right arm). I also feel it would have been better to have been a little bit wider and got all of the guy's left hand and more of the ladies back into the shot.

This photograph was taken at the Margate Big Event on a cloudy and, later, rainy Sunday using my Nikon d80 and processed using Lightroom.

I'll probably return to the more usual format next month.