Whilst visiting Richard's folks in Margate, I had some time to craft a few things (in order of them starting):

I decided to put the maximum number of warp threads I could onto my picture frame loom (33 as it turns out) and just try out a few things. I started off doing sets of 6 weft rows in pink, interlaced with 2 weft rows in blue. 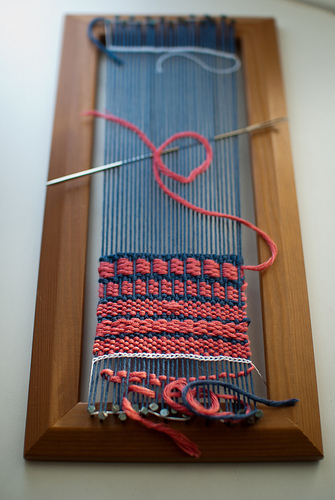 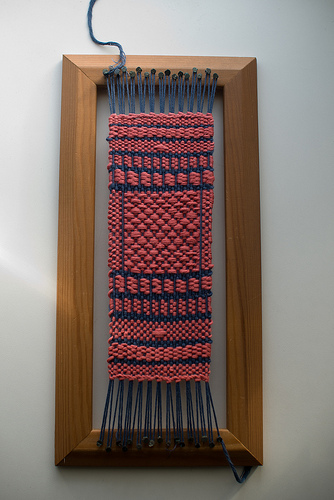 For the main, middle section, I attempted to follow my first proper draft, and as it was an 8 warp pattern, I used plain weave on the edges, and left a warp thread visible to use as a frame. The draft I followed was this one from the fantastic Handweaving.net

Then I repeated the first 5 sections in reverse before finishing off both ends using hemstitching. 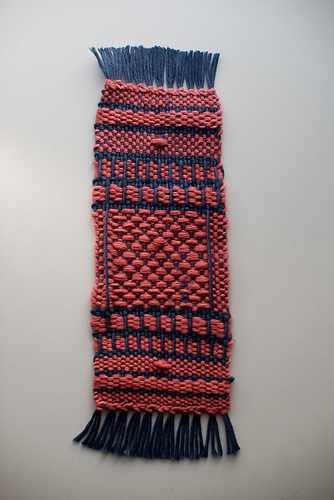 I learnt a few things during this:

A friend bought me a lovely book for Christmas, and despite having made 2 bookmarks as presents (#3, #5) for other people, I didn't have one myself. As the loom was still being used for Weaving Project #6, I decided to knock up a bookmark using the flower loom and a simple chain stitched "stalk" 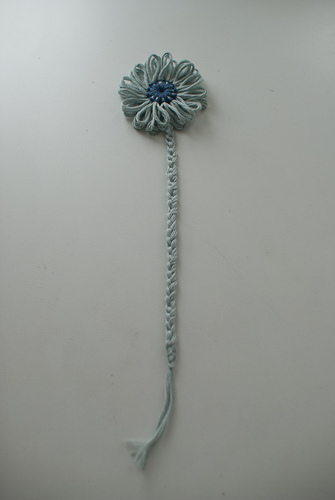 It is a simple creation - just 4 rounds of duck egg blue on the smaller of the pins on my bloom loom with a long tail left at the beginning, and at the end, and the centre stitched in the darker blue.  The two tails were then just chained together (I can't crochet yet, so although messy, this is a major achievement) 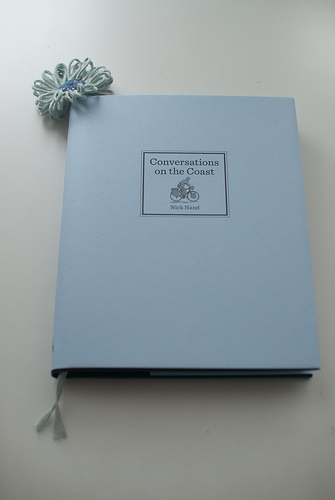 Flower loom flowers are quite addictive. They're very simple, and don't take much time to make - 20 - 30 minutes each depending on the complexity. And yet they look quite good. These are going to make a posey for my Mum. A friend has sent me lots of other ideas for things I can do with these flowers too, so there will be more of these being created. There was an additional one created, but it was gifted to my Mother-In-Law. 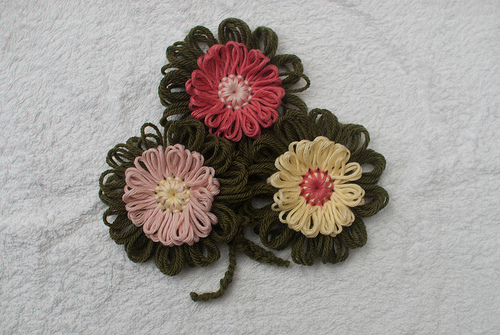 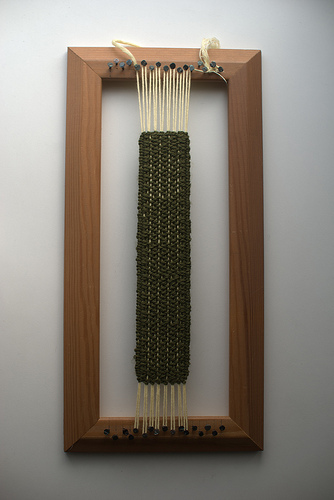 This project was properly planned from start to finish - I looked through HandWeaving.net to select a draft that didn't look too complicated, and then worked out the number of warps I'd need (a multiple of 3 plus 2 on either side as a "margin"). The yellow thread is the same style of thread as that used in Project #6 but it works fine as a warp and doesn't split in the same way. I used some green wool I picked up a while ago as the weft and found it much easier, and more consistent to work with resulting in pretty straight edges. I now need to work out how to determine whether a yarn will work or not without standing in a shop and twisting it around.

This is the first weaving project since #3 that I can say I'm actually happy with. The yarn worked well, the pattern was easy to follow, and I enjoyed making it. Even the fringe bits are much more even than my previous attempts (don't ever let me cut your hair though - chances are that you'll end up with much less hair than you planned) 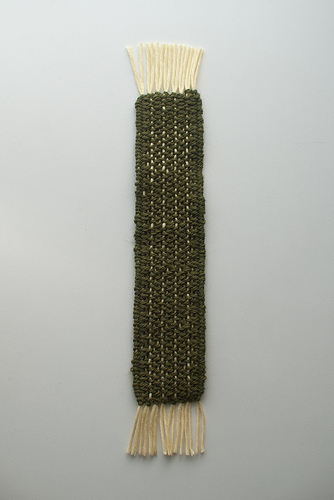 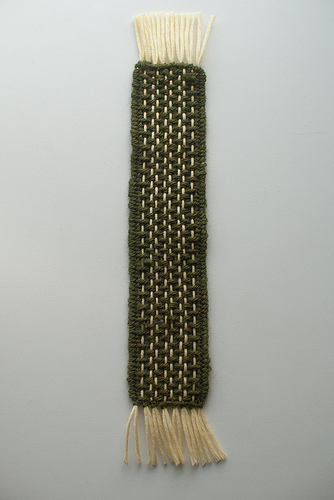 The only problem I have is that I mainly use my kindle for reading, so don't actually need a lot of bookmarks. However, more bookmarks will be being created as they're a great size to experiment with, and only take about 3 hours to weave.

I'm hoping to find some time over the rest of the holiday period to craft a few more bits and bobs, but thought that this was a big enough blog post already!