When we chose our new car last year, one of the extra things that we were looking for was a good experience playing music, audiobooks and podcasts. We wanted to plug in our devices and for the sounds to be effortlessly streamed through the in-car sound system.  Our previous solution was via an FM transmitter. These worked, but were temperamental to say the least, and Richard used to get rather annoyed with the amount of retuning needed on any medium to long term journey.

So, we chose to have the Blue&Me option installed into our new car.

We plugged in an iPhone and got the following, somewhat arrogant, screen: 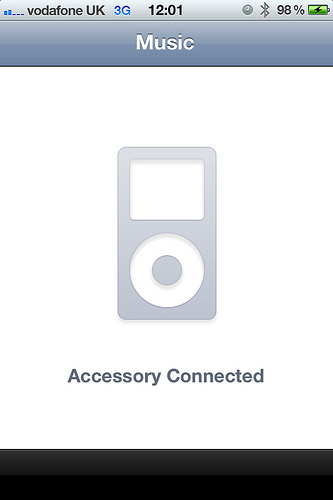 The car seems to have become a very expensive accessory. Once the device is plugged in, you can no longer control what plays via the device, instead the driver gets forward and back controls on the steering wheel and that is about it. So, if you want to change from a podcast to music, or to chose a new album to listen to, you need to disconnect the phone and start it playing before reconnecting the device.

Richard recently gained a google android phone and decided to see what happened when it was plugged in. Like the iPhone, the driver gets forward and back selectors over what is playing. Unlike the iPhone we couldn't work out how to set something up to play. There are three or four different media players that we found on the phone, and setting anything playing via any of them seemed to result in a different song playing through the phone speakers to that playing through the in-car stereo. Totally baffling and we failed to work it out.

So, this is definitely an improvement - at least for an iPhone - but isn't good enough yet.