Sunday arrived and having headed home to bed on Saturday evening I strolled into the office at around 9am to see what was happening. The first, and only, issue arose when Ian arrived and informed us that breakfast was half an hour late due to Pret's oven breaking down or something. We pushed the sessions back by 15 minutes and soon caught up again, so no real damage done.

There were a few more Madgex people around and so we shared out the door watch duties between us so that we could all try and see some sessions, oh, and play table football :-) 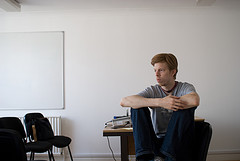 I managed to see 4 sessions in total:

These talks were quite a mixed bag and I found that the one I gained the most from was probably the discussion led by Sjors about multi lingual sites, something that I've recently become interested in. I found Norm's talk (i18n and l10n) dissapointing as it turned out to be heading towards a product demo (which failed) rather than a study into the concept. I still ended up with a lot of links and articles to follow and read. 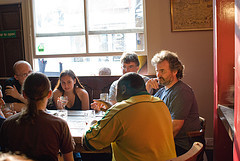 After the closing talk, and the clean up session, we headed off to the Madgex Arms for a few pints before heading home to recover.
comments powered by Disqus