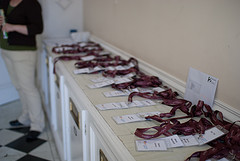 Ok, so starting off the day with a hangover was inevitable, but not ideal. I got to the office at around 9.30 and started helping out. We had a lot to do and not a lot of time to do it in before the attendees started to arrive, and in fact several arrived early. We hadn't even finishing putting name tags together and so I had to head downstairs armed only with a list (in the order that people registered in) and name badges for those people with first names beginning with A, B or T. I was hugely intimidated opening the door and facing a vast amount of people in the foyer. Still, I got them processed, and it wasn't long before reinforments in the guise of Alex and Gillian appeared to help out. Phew! I obviously wasn't the only one with a hangover as people continue to drift in up until around 2pm, meaning that one of us had to be on the door to let people in and out. At around 2ish, Glenn, Sally and I decided that we'd done enough of this, and that people could phone from now on as the next sets of sessions were about to start.I managed to attend quite a few sessions during the afternoon and evening, and I have to say I really enjoyed them. The sessions I saw were:

Following on from dConstruct yesterday this list of things to read, or look into just continues to grow.

The food sponsors have been incredibly generous, with lots of pret food for breakfast, a wonderful spread from The Cherry Tree Mediteranean Deli (which Ryan Carson decided to throw away after lunch rather than leave around for people to nibble on - what a waste of truly wonderful food) and loads of pizzas and beer. Not forgetting the generous amounts of fruit, chocolate, crisps and soft drinks too.I've got a few talks I want to attend tomorrow, especially the Internationalisation and Localisation one - as this is relevant to my last project and a recent blog post so I'm hopeful that I can work my helping out duties around them.
comments powered by Disqus