The adventure continues around a specific theme: the public space. Can one photograph everything in the public space? What are its visual benchmarks? What is unusual about it? When does it become private?

I decided to contribute one of my found project photographs, selecting Found: 2 arm chairs as, to me at least, this scene was unusual, with chairs like these being normally in a private space rather than a public space, and with the road markings making it evident and obvious that these were indeed in a public space

Today I received the following email, letting me know that my photograph was displayed, and including a photograph of my photograph being projected - on which I can count at least 6 heads watching.  Overall, pretty pleased.

Your image was shown during the Nuit des Musées in the Rolex Learning Center at EPFL. Enclosed you will find an installation view of your image that shows it in the wall.

Thank you for participating. We also sincerely hope you will visit the museum.

From the team at the Musee de l'Elysee 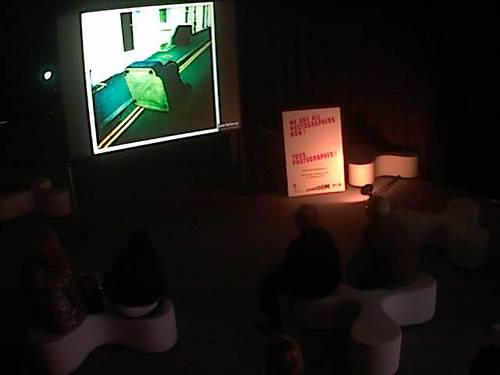