I've visited my Mum quite a few times in the last few months, and on at least two occasions the storyline artefacts have been mentioned to me by members of staff.

Most recently on Monday when one of the Senior Carers mentioned that he still looks forward to a new postcard arriving and how much he likes the stories that came with them, the words that give it context (I'm still sending them almost weekly, and usually write a bit about the picture and a bit about my week). One of his more recent favourites was with my Mum as a bridesmaid (2nd row down, on the left, she is one of the visions in purple). He described it without my input, so he genuinely remembered it. He said it was nice to be building up a picture of her which was music to my ears. 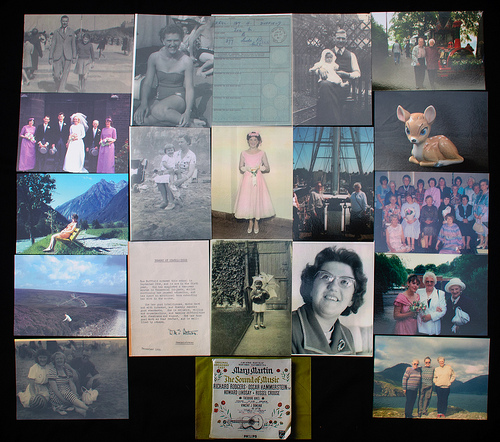 I've been busy working on the more "book" styled aspect of the project as well, delivering a new chapter most visits. I mapped out what I was going do do in February and have pretty much delivered on that, writing chapters on Houses, Schools, Work life, Family, Friends, Music and Church. There are still extra pages to write for some of these, and there is at least one Hobby related chapter to write but I've written/assembled just short of 70 pages so far.

A couple of visits ago I had a chat with Mum's keyworker who told me that the home are now looking at doing story based projects with other residents. I know that there has been a bit of a push on these things generally and several organisations have been talking about them in the past few months, but, according to the keyworker, it is related to my work for Mum.

Both of these comments mean a lot to me. It's good to know that whilst I can't be with Mum, I am at least still contributing to her care in some small way.