Amongst my selection of lovely birthday gifts from Richard was a Mu plug - this is a normal 3 pin UK plug with a (literal) twist (the pins twist into a line so that the plug is much more compact for transporting). This is going to be incredibly useful for my train trips to the North to see Mum as I often plug electrical kit in on the train to get a bonus charge. 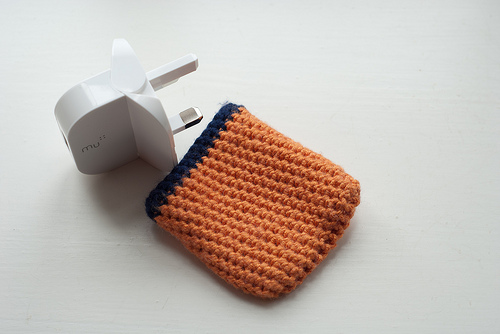 I decided that I'd make a sock style case for it. It took me 3 attempts to get it to the point where I'm happy with it and Richard did ask why I was doing this. Did I think it needed a case? Or was it more of a ”because I can” thing. I think it was mainly the latter.

Ages ago I'd seen a pattern for an iPhone/iPad sock and it seemed simple. Obviously I didn't download the pattern, that would have been far too sensible, and I was in a holiday cottage with no internet. So I experimented and improvised.

It's made with Sirdar Snuggly baby bamboo DK (mainly tigger but also with a little bit of skittle) and has helped use up a bit more of my yarn stash.

I started off with a 4.5mm hook and did a foundation chain of 12 (initial attempts were 12 with 4mm, and 11 with 4.5mm before settling on this). I switched to a 4mm hook, and did a single chain and placed a marker here. I then worked into the back side of the 12 switches, and then back along the front side of the stitches to complete the loop, slip stitching into the marker. After that it was simple enough, single chain, single crochet into every stitch, measuring against the plug every couple of rows. The use of the marker was introduced on this, attempt 3, and made all the difference as on the first 2 attempts I couldn't quite work out where the starting point was which led to some really wonky edges.As the bag that this plug will mainly travel in is blue with an orange trim I decided to do this sock as orange with a blue trim.

And I'm rather pleased with it. I'm also quite pleased that I worked this out on my own, using trial and error, and a bit of logic. It would have been very easy to have relied on the internet or friends but instead I used my brain and that feels good. The only way I could explain this process to Richard was related to debugging an algorithm, when sometimes you just need to throw away what you had and start again building on what worked. And once you've got it sorted, you recognise it as being right (or right enough!). 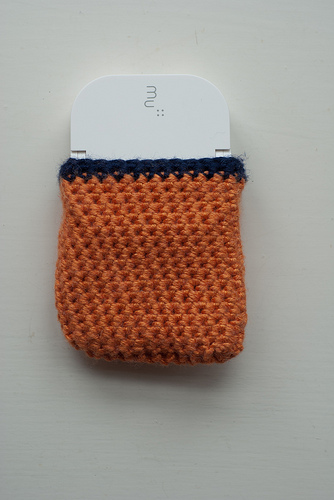