I've been thinking about making things quite a lot this year, basically since emptying my family home and realising that some of the odds and ends that had the most emotion attached were either things made by one of my parents, or items that they used to make things. I haven't really made anything physical (or at least not that isn't photography related) in a long time, but I thought it was time to give it a go.

I stumbled across the idea of a cross-stitch iPhone case a while ago, possibly via Denise, and thought it couldn't be too hard or ambitious a project to start, so I ordered one.

Whilst waiting for it to arrive, I started giving some thought to what I wanted to stitch. My first thoughts were around sunflowers, as I'd just stumbled across a whole field of the lovely things, and they're my favourite flower but having worked out that my canvas size was 33 x 69 and failing to find any inspiring looking patterns available, I realised that sunflowers might be a bit hard to get any form of definition with at this scale. I did stumble across this excellent make your own cross stitch pattern site along the way, which takes an image and spits out a cross stitch pattern, and so I started thinking about this as a possibility.

So, back to the drawing board, literally. I took up my coloured pencils, and a notepad, and started sketching different flower shapes with the hope that I'd come up with something usable. I soon sketched out the kind of end result I was hoping for, a simple matching coloured background with flowers appearing out of two of the corners (see below).

This helped me to concentrate on sketching a part flower, with the right kind of petal shape and definition for what I wanted to do with it. I worked on the theory that I'd use the same basic flower on both corners of the design (which also had a little to do with the fact that I could then use the pattern maker and get free patterns - up to 1000 stitch patterns can be produced free of charge). The following is what my final sketch looked like. 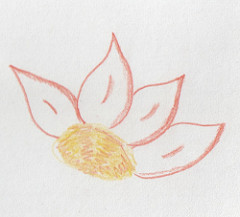 The next stage was to polish it up a bit. So I loaded it into Pixelmator, and cleaned and coloured it up until it looked like the following. 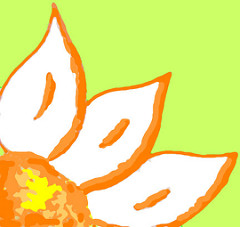 Which I then uploaded to the pattern maker. Because I wanted a pattern that actually represented the shape and size of my canvas, including the camera lens hole, I plotted it on to graph paper and worked from that picking up 5 threads from my local sewing store (who were very helpful and gave me lots of advice). 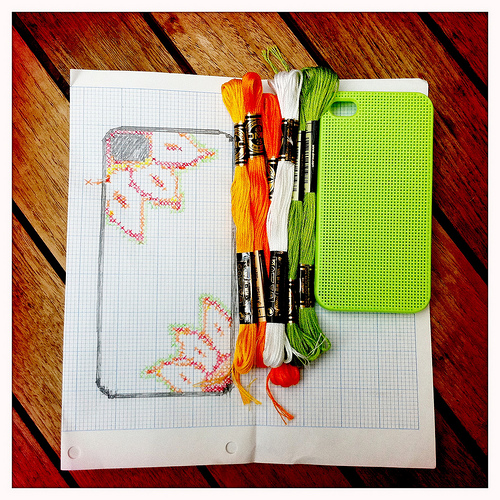 My first experiences cross-stitching didn't go so well, and I actually unpicked everything I did in my first session as I soon realised that my DMC thread was actually a bit too thick to cross-stitch without it looking too heavy. I also realised that I'd got my dimensions on my graph paper slightly wrong and so needed to adjust it a bit more. After my false start I decided to put it away, rethink and restart another day. My second attempt was much more successful, and after that I started making reasonable progress. More adjustments to my pattern took place as I was going, some deliberate, some due to mis-counting. 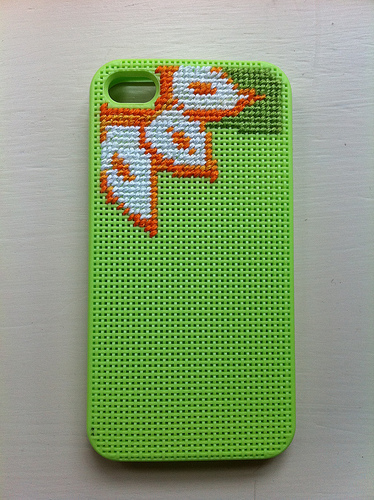 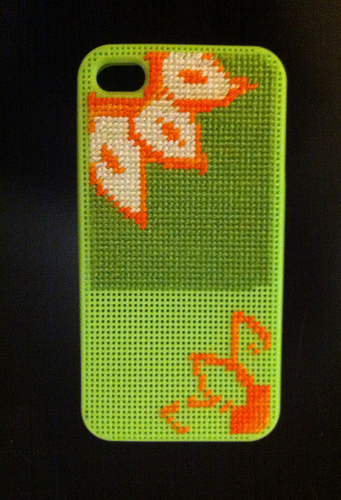 And finally, today, I've finished it.  I'm pretty pleased with it as a first attempt. There were definitely a few lessons learned, both about designing/working with the iPhone case specifically, but also general reminders about needlework in general (it had been many, many years). I now just need to find something to seal it with (I'm thinking of scotchgard or something similar) to prevent accidental damage or getting too grubby too quickly. 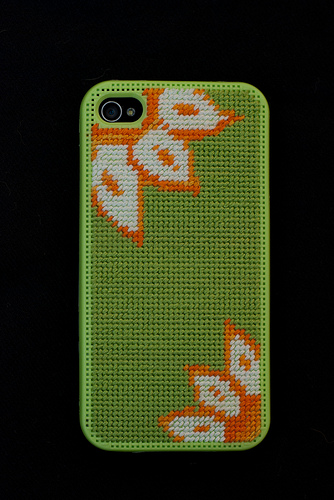 I've enjoyed doing this, and I'm really pleased to have taken it from a sketch right through to the finished article and it's given me quite a feeling of achievement. I've ordered my next case, and have my next project planned out and ready.