Another enjoyable £5 App evening last night at the Regency Town House. The format of this evening was slightly different to the previous 2 with a presentation from Dan Glegg on Tails in the first half, and then after our refreshment break 3 pitches from Neil, Stuart and Danny. 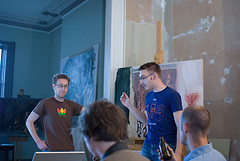 Dan did a good presentation about his bug tracking software, explaining what his focus was and what lessons he'd learnt on the way. He released the application as a beta to a few people, and ended up with 100 or so users using it and providing valuable feedback (which was tracked in tails itelf). Some of the beta users came up with some non software uses for tails such as recipes and text reviews which just goes to show how inventive people can be. It sounds like the project was built to meet his own needs, and so the use cases etc are all well thought out, after all, bug tracking is obviously a process that most developers have a need for. Some interesting questions were asked of Dan, including who is his competition and what will he do if it succeeds - questions which are relevant to all of the £5 app presentations I've seen to date. Yesterday Dan announced that tails is ready to ship, with pricing packages all ready to implement. Good Luck Dan! 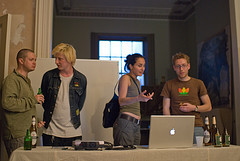 After a quick break (during which time Dan demo'd tails to anyone who wished to see and whilst ginger cake was munched) it was time for the pitches. 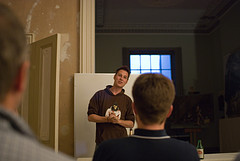 First up was Neil talking about art-hole. This is his idea of a community/social network site targetted towards the large number of artists that live and work in Brighton. The open house website doesn't represent artist's work as well as he'd like - only allowing one image per house, not even one image per artist, and so he's interested in using as many existing sites and APIs to produce a useful community to showcase art. 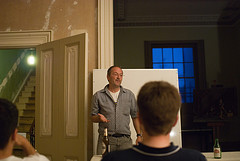 Next up was Stuart talking about a media finding tool which would run across the internet allowing photographers/videographers to search for their own work which had been copied and was being used without consent. This sounded like an immense amount of work to me but maybe I missed something obvious. 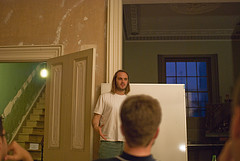 The final pitch was Danny's retro-pitch. Danny came up with an idea a few weeks ago, and has implemented in that time. It is basically a service which strips the comments and whitespace out of CSS files thus reducing bandwidth required. Andy pointed out that there were others offering this service as well with some added functionality. As Danny pointed out this has been released as open source and so if people want to use and change it they can do.After a successful evening, a lot of us headed down to the Farm for a pint and a chance to do more chatting. Another great evening Ian and John. Thanks!
comments powered by Disqus