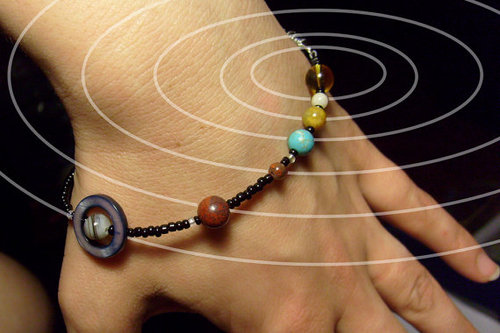 A beaded bracelet demonstrating the relative distances
between the planet orbits in our Solar System.

A wearable version of an astrometric chart,
with stone, glass, and shell beads representing the Sun and Planets,
this Solar System Bracelet is a decorative cosmogram,
inspiring thoughts of the vastness of Space.

Planets and Sun are enlarged for dramatic emphasis*.

This bracelet includes the Sun, Mercury, Venus, Earth & our Moon, Mars, Jupiter, Saturn, Uranus, and Neptune. Planets with many moons have opalescent glass beads next to them on the bracelet.

*Not for use in actual Space Navigation

This is just delightful. I'm not a big jewellery wearer, but I love the idea of this. And I love the subnote "Not for use in actual Space Navigation". Shame it sold between me spotting it this morning, and going back for a closer look this afternoon.