During my lunch break today I headed off to the Brighton Museum & Art Gallery to take a look around the BPB exhibition being held there.  It wasn't that well signposted once I'd got into the museum, so for any other explorers who are looking for it, head upstairs and head towards the cafe - it is pretty close by there.

The premise behind this exhibition is interesting, what do established photographers see when they visit Brighton?  The quote from Martin Parr on the wall of the gallery is

There is nothing more fascinating that to learn what others think of us.  This process can be as cruel as it can be kind, but we still want to know, despite the risks

Likewise, it can also be both revealing and stimulating to know what a photographer may make of the town or city in which we live

The three photographers whose work is included are Alec Soth, Rinko Kawauchi, Stephen Gill although to be strictly correct, it was Carmen Soth, not Alec who did the photography due to visa issues.

Stephen Gill's work appeals to my love of the found objects, but in case he is adding his found items to the photograph directly by dropping them into his camera, resulting in some odd imagery, that was somewhat uncomfortable viewing, slightly nightmarey, a bit Tim Burton.  From the BPB exhibition description:

For this commission Hackney based photographer Stephen Gill has created Outside In, a series steered and guided by the physical place itself, literally scooping up bits of Brighton and dropping parts of it into his camera. Gill employs finds such as seaweed, local plant life, a false eyelash, a jelly bear, fish tails, etc discovered on his travels or near where his photographs are made. Insects crawl across the film emulsion like creatures caught in amber. The objects introduced to the camera chamber are integral to the photographs rather than superimposed, their place in the composition occurring entirely at random and establishing both harmony and conflict.

Rinko Kawauchi's images were very eye catching, with some great use of colour in one section, and some wonderful captures of the murmurations of the birds over the West Pier. What really struck me about these was the wonky horizon lines.  Every book, article or blog post I read insists that the horizon should be straight, especially when it is the sea.  Some of these photographs aren't, and I found that disconcerting and yet interesting.  Again from the BPB exhibiton description:

Acclaimed Japanese photographer Rinko Kawauchi has been drawn to the spectacle of flocking starlings at Brighton Pier. Here during the winter months at dusk, the birds gather in their tens of thousands, wheeling around to create a mesmerizing swirling cloud called a murmuration. Kawauchi is fascinated by the ephemeral nature of this phenomenon and, continuing with the theme of the flock, she has also trailed groups of people through the city. This commission, her first in the UK, is supported by funding from The Japan Foundation, The Great Britain Sasakawa Foundation and The Daiwa Anglo – Japanese Foundation.

Alec and Carmen Soth's work is simple and charming.  I loved the story that Carmen had written, and illustrated with photographs of the little bunny boy.  (Sorry about the quality of the photo - white balance is poor, and lighting wasn't great for my iPhone) 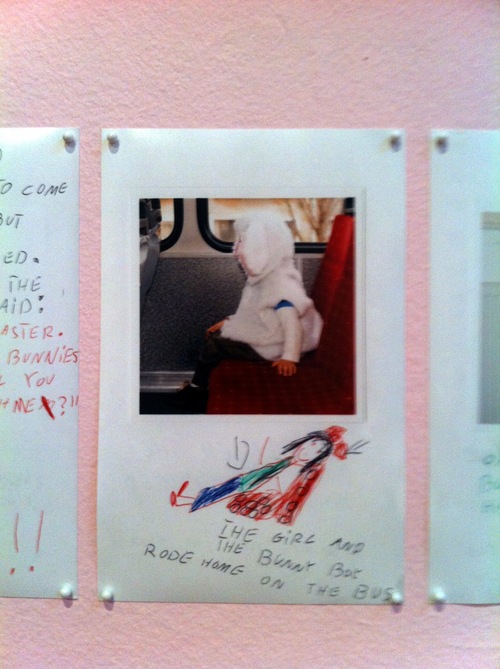 I loved the fact that it turned into a treasure hunt, to keep her interested and motivated, in the same style as my 2nd Madgex Photography Challenge, which in turn was inspired by Lomokev's Hot Shots courses.  Here is her list (taken from the Little Brown Mushroom site):

Once more from the BPB exhibiton description:

For this Photoworks commission, his first in the UK, Alec Soth has made work in collaboration with his daughter Carmen walking around Brighton & Hove. Like much of his previous work, the photographic journey of Brighton Picture Hunt combines poetic and documentary sensibilities, each photograph and idea leading to the next. People, places and objects are woven amongst local newspaper headlines. Serendipity is at play as text and image combine to make uncanny connections and provide a captivating portrait of a city.

One of the claims on the BPB site is that

and this is certainly one aspect of the two curated BPB exhibitions I've seen so far that I've really liked.  It focuses the attention on the imagery without getting distracted by reflections, framing choices, mount choices etc and simplifies it wonderfully.

In Summary, three quite different takes on the city I've chosen to live in, and the city where I do a lot of my photography.  Well worth a visit.